Different Styles of Bay Windows: Which Is Best for Your Home? 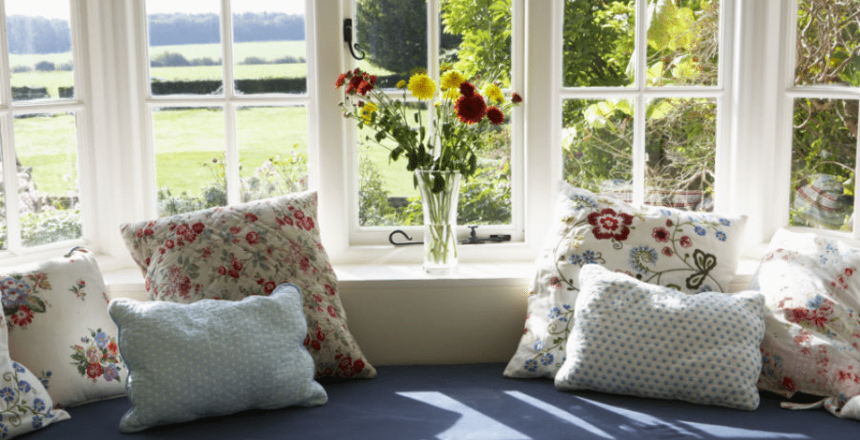 A bay window is a window-enclosed bump out from an external wall of your house. Bay windows add a bit more space to your room. What’s more, they increase the natural light and ventilation.

You can locate a bay window in any room and even on upper floors. While they’re often included in a new build, bay windows are also a construction that can be added during a remodel. You can buy a bay window as a prefabricated kit or have the contractors customize the installation for you. Find out which bay window style might work best for your home.

The classic bay window consists of three sides protruding out from the exterior wall held in place by a cantilever support. The roof should match the house roof, though a hipped profile is the most common to accommodate the bump out. The bottom of the bay window may feature corbels or other support.

Concerning the glass itself, the front panel is typically the largest pane. It’s almost always immobile. The side windows are the same height but narrower. They usually open for ventilation. The windows can be set at 30-degree, 45-degree, or 60-degree angles. The classic bay window is ideal for adding lounging space on the first story of your home.

A box bay window is another form of the classic bay. However, the angles of the side windows are different — they’re set at 90 degrees. They’re also narrower. So, the result is a three-sided rectangular shape instead of the top third of an octagon. Box bay windows are sometimes wider than classic bays.

Box bay windows are held in place by cantilever support, too. One advantage they have over classic bays is that they allow for more of a front window without having to extend the hole in your wall. They also sometimes come across as more modern because of their obvious boxy shape.

An oriel window is essentially the same installation as a bay window. The biggest difference is that oriel windows are for upper stories. They can feature either the classic bay or box bay construction. Oriels date back to the Middle Ages when builders would add a porch or gallery.

Because of their historical origins, oriel windows are usually elaborate. You often see more trim around the frames and roof. What’s more, they typically feature corbels or brackets as a base. These pieces are often highly decorative. Oriel windows are ideal if you have a Victorian or other historical and ornate house.

Bow windows are technically their own category of window, though they’re similar to bays in that they protrude out from the wall. A bow window consists of four to six windows set at wider angles. Because of the increase in glass panes and the width of the angles, they create a gentle arch out from the side of the house.

Bow windows offer a couple advantages over bay windows. They feature more panes of glass, so they often allow more natural light into the room. All the windows are the same size, so they offer a classic sense of symmetry. Bow windows also increase the amount of space provided by the bump out.

However, that construction is also their disadvantage — a bow window takes up more space. They’re also a more involved installation. However, they do make for an elegant addition.

Like bow windows, garden windows are technically their own category. They’re about half the height of a traditional bay window, though they’re otherwise the same in form. They also carry a specific purpose — space for a container garden. As such, garden windows often feature a shelving system to accommodate the containers.

Homeowners often like to locate their garden window in the kitchen, usually perpendicular to the sink. Not only do they provide that space for interior gardening, but they offer a pleasing view that you can enjoy while using the sink. What’s more, garden windows are an easier install than the other styles of bump outs.

Consider adding one of the above types of bay windows during your next window replacement. Midwest Windows & Doors has a wide variety of bay windows to choose from.

and receive 10% off labor on any window, siding or door project